In 2016, GE was looking to draw the public’s attention to the game-changing improvements a new jet engine material could offer.

To accomplish that goal, they didn’t go the traditional route of producing sample jet engine parts. Instead, they made a hot sauce.

With the help of Thrillist and hot sauce maker High River Sauces, a sauce called 10^32K was born. The name is a tongue-in-cheek reference to the temperature in Kelvins at which all matter breaks down.

It came in a tube made of silicon carbide, the key building block for this jet engine material, called ceramic matrix composites (CMCs). Not only did that silicon carbide tube prevent the sauce from losing its heat and flavor, but it also represented what CMCs could do inside a jet engine: withstand the heat. 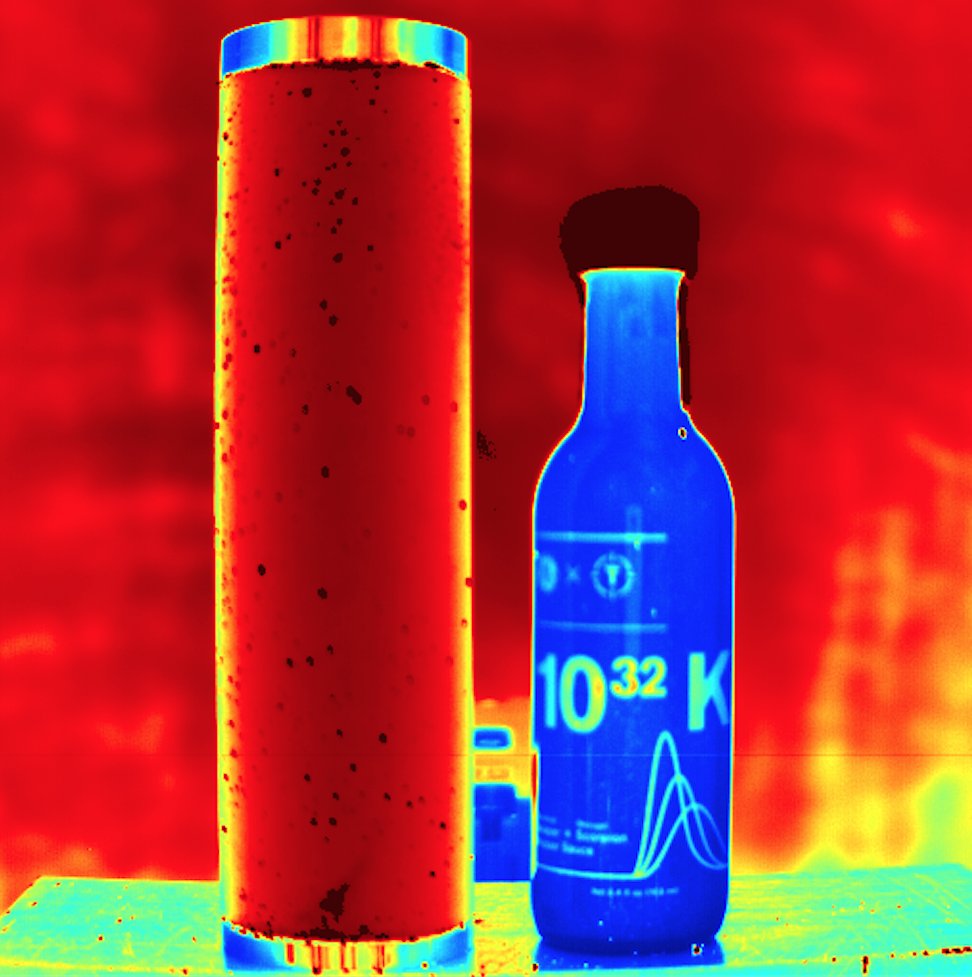 A thermal scan of the silicon carbide tube and hot sauce bottle.

Today, GE engineers see CMC parts flying in commercial engines all over the world. And these ceramic parts aren’t a clever marketing gimmick. GE boasts the industry’s first and only integrated CMC supply chain and has already churned out hundreds of thousands of these parts to beat the heat in the hottest areas of today’s engines.

Those qualities add up to a super material enabling more efficient, more durable jet engines. If you’re a design engineer, those attributes are sure to grab your attention—much like a scorching hot sauce.

GE’s CMC turbine shrouds surpassed 10 million hours in flight in the hottest section of the CFM* LEAP engine in 2021, and more than 100,000 of those turbine shrouds have been produced at scale at a state-of-the-art production facility in Asheville, North Carolina. The world’s largest commercial engine, the GE9X, has five different CMC parts in its hot section.

That demonstrated commercial success has engineers and program leaders bullish about CMCs and their impact on a new engine in GE’s military business: the XA100 Adaptive Cycle Engine.

GE’s XA100 is unlike any engine in jet propulsion history. It’s engineered to switch between high-thrust and high-efficiency modes, allowing it to adapt to just about any situation a military jet could encounter in the air. In December 2020, it became the first ever flight-weight, three-stream adaptive cycle engine to fire up.

The XA100 is sized and optimized for the Lockheed Martin F-35. Using traditional materials, it would’ve been a tall order to create an engine with 25% better fuel efficiency, 10%+ better thrust, and significantly more thermal management capability. But the XA100’s CMC parts help change that.

“The XA100 makes the most extensive use of CMCs of any commercial or military engine. CMC parts help us unlock the weight savings and thermal efficiency to achieve transformational performance in a package sized for the F-35,” says David Tweedie, GE Edison Works’ general manager for Advanced Combat Engines.

“GE knows how to do metal parts. We’ve been optimizing them for as long as we’ve made engines,” Ernesto Vallejo, an XA100 design engineer working directly with CMCs parts, says. “CMCs are the next frontier. The extra flexibility you get when designing with CMCs is a big part of what makes this [XA100] design more revolutionary and more exciting than any fighter engine out there.”

Incorporating this super-material into the engine was part of the plan all along. GE’s prototype engine for the Air Force’s ADVENT program, a program that led to the XA100, set a world record for the highest combined compressor and turbine temperatures thanks in part to CMCs. GE also ran the world’s first  rotating CMC blades inside an F414 engine validating the material’s ability to withstand the challenging environment inside a high-performance military engine through 1,000 cycles of testing.

For fighter aircraft like the F-35, increased durability in hot and harsh conditions is critical. As researchers at the GE Research Center in Upstate New York looked to illustrate the toughness of a CMC part, they decided to do some shooting—both with a camera, and with a steel ball aimed at a CMC and non-CMC plates.

“GE is a leader here. We’ve got a lot of experience already, but we’re still charting new territory to see where CMCs could take us,” Vallejo added. “It’s just an impressive technology. When we have visitors to see our operation, ‘wow’ is a pretty typical response.”

The best part? Engineers are only scratching the surface of applications for CMCs, meaning you’ll likely see even more engines incorporating this technology in the future.

*The LEAP engine is a product of CFM International, a 50/50 joint company between GE and Safran Aircraft Engines.